Opera ensemble of the Academy of Arts, Osijek – CROATIA

The recording of the concert: 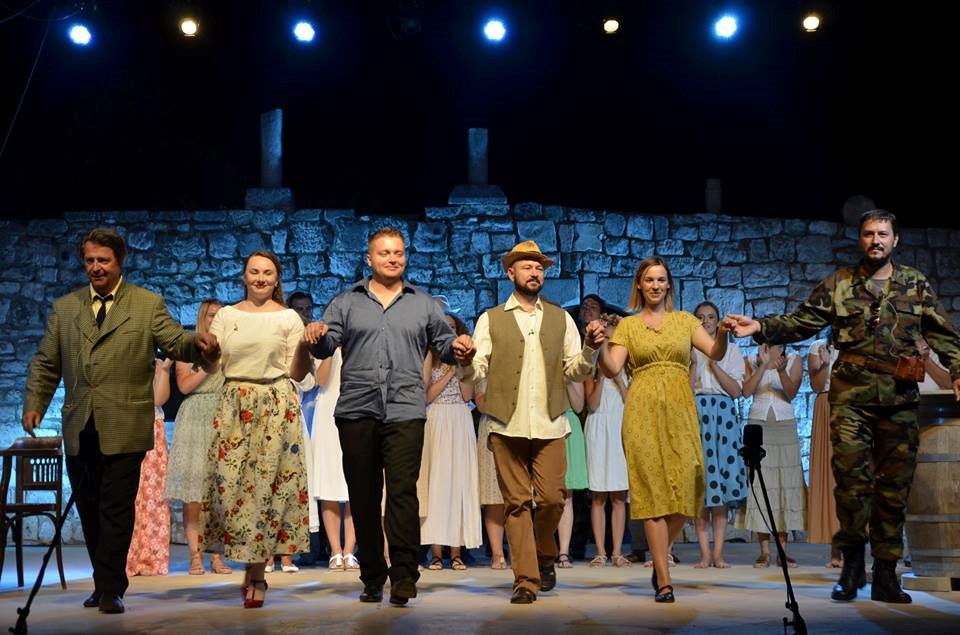 The Opera Ensemble of the Academy of Arts Osijek was founded in 2010 with an aim of public opera performance that would bring together musicians of the city of Osijek, former and current students of the Academy of Arts, music professors and numerous guests from Croatia and abroad (Serbia, Hungary, Bosnia and Herzegovina, South Africa, United States of America, Germany, Israel etc.). In addition to complete stage opera performances, the Ensemble performs in concerts of opera and operetta works as well as other vocal literature. Among the most important opera and operetta titles of the Ensemble are the performances of Purcell: Dido and Aeneas, Zajc: Nikola Šubić Zrinjski, Puccini: Gianni Schicchi, Strauss jr.: The Bat,  Mozart: Cosi fan tutte, Donizetti: Love Potion, Mozart: Figaro’s Wedding, Puccini: La Boheme and a number of concert performances.
The Ensemble works together in cooperation with guest musicians from Croatia and abroad and with institutions such as the New York Academy of Arts, the Faculty of Music and Visual Arts in Pécs, the Westminster Choir College, Princeton (USA), and with conductors Simon Peter Dešpalj, Balazs Kocsar and numerous vocal soloists. The Opera Ensemble has performed in Pécs, Sarajevo, Belgrade, Skopje, Bitola, Štip, Split, Hvar, Grožnjan, Buje, Umag, Đakovo, Valpovo; it has performed at Kolarac Foundation in Belgrade, at Macedonian Opera in Skopje, at Hvar Summer Festival, Osijek Culture Summer, Sarajevo Winter Festival, Skopje Summer Festival, BitFest – Bitola Festival, Pécs-European Capital of Culture, Valpovo Summer Festival, and within the programme Jeunesses musicales Croatia ... The directing of these performances is signed by Robert Raponja, Ivan Leo Lemo and Berislav Jerković. The Opera Ensemble of the Academy of Arts with its 10 vocal soloists, 20 members of the choir and 28 members of the orchestra stands out as a unique opera ensemble in the Republic of Croatia that has in short time taken a significant position in the programmes of cultural events presenting artistic qualities and its potentials to the public both in Croatia and abroad. The art director of the Ensemble is Berislav Jerković, associate professor, D.Sc.

Senka Nedeljkovic (1978), soprano, was born in Novi Sad (Serbia) where she finished elementary ballet and secondary music school "Isidor Bajić" in the class of prof. Prizrenke Petković and prof. Nikola David. She graduated at the Academy of Arts in Novi Sad in the class of prof. mr. Vera Kovač Vitkai in 2004, in which she also graduated in 2007. In 2009/10. she perfected the lied and the oratory in the class of prof. Martina Klietmana at the specialist studies of University of Music and Dramatic Art in Graz, Austria. Since 2001 she has been a member of the Serbian National Theater Workshop in Novi Sad, where she has performed the following roles: Adina (G. Donizetti: L'Elisir d'amore), Musetta (G. Puccini: La Bohème), Anina (G. Verdi: La Traviata), Gianetta (G. Donizetti: L'Elisir d'amore), Ana (P. Stojanović: Vojvoda od Rajhštata), Evica (M. Logar: Pokondirena tikva), Anita (J. Strauss, Jabuka) Contaza Stazi (E. Kalman: Knjeginja čardaša), Zerlina (WA Mozart: Don Giovanni). Since 2005, she has been a soloist at the Chamber Opera Society in Novi Sad. Since 2014 she has been a member, opera soloist at theater Madlenianum in Zemun, where she plays as Pepi in operetta Vienna Blood (J. Strauss). In 2007 she won the first prize at the "Dr. Vojislav Vučković "in Belgrade and in 2001 at Montserrat Caballé in Andorra la Vella (Andorra) entered the semifinals. Since 2002, she worked as a vocal pedagogue at the Isidor Bajić Music School in Novi Sad.

Anja Papa (1994) graduated singing and piano at the Osijek Art Academy. She has won awards at the following international competitions: 3rd place (bronze medal) in solo singer category up to 15 years - 2009 International Musical Eisteddfod International Competition in Llangollen (United Kingdom); 2nd prize in category women's voices - 2014 at 1st Vera Kovač Vitkai solo singer, Novi Sad; 2nd prize at the International Singing Competition "Lav Mirski", Osijek, 2015
She has performed at numerous concerts and opera performances in Croatia and abroad as choral, concert and operatic soloists. During 2014 and 2015 she participated in numerous festivals and concerts: Concert Musical Legacy of Bela pl. Adamovicha Cepinskog - premiere at HNK Osijek; Concert of Vocal Soloists of the Academy of Art in Osijek, songs of Felix Mendelssohn-Bartholdy - Museum of Fine Arts; County Concert Cycle 2015 in the Chapel of the Prandau-Normann Valpovo Castle; Concert for Peace Dona nobis pacem Vocal Ensemble and the Brevi - Chamber of the Brevi - Museum of Slavonia Atri Glavni straže i dr.
Since 2013, she is conductor of the Children's Choir "Osječki zumbići" and the Children's Opera House of Polyphony and has been preparing a children's choir for operas  La Boheme and Tosca in collaboration with the Croatian National Theater in Osijek. In 2015, she has successfully debuted the role of Despina in the opera Cosi fan Tutte, the premiere performance of the UAOS Opera Ensemble in Osjek summer festival 2015 (conductor Balazs Kocsar – Hungary state opera Budapest). With the Opera ensemble of UAOS in 2016, she performed in the role of Gianette in the opera Love Potion, G. Donizetti performed in Grožnjan, Umag, Osijek, Pécs, Split and Hvar (conductor Balazs Kocsar) and in 2017 with the same ensemble and in the role of Susanne (Mozart : Figarov pir) with performances in Groznjan and Buje. She is the winner of the Dean's Award in 2016 and Rector's Award 2017.

Vlaho Ljutić (1956) graduated in 1987 at the Music Academy in Zagreb in the class of prof. Vladimir Ruždjak. In 1982 he was employed at the Croatian National Theater Opera in Zagreb, where he performed a number of roles and recorded numerous radio and television shows. After completing his studies, he debuted the role of Nikola Šubić Zrinjski in the same opera by Ivan pl. Zajc, which is still one of his favorite achievements today. In 1992 he became a permanent member of the Croatian National Theater Opera in Osijek, where he achieved the most demanding roles of the baritone repertoire in operas of G. Verdi: Il trovatore - Luna, Un ballo di maschera ples - Renato, Traviata - Germont, Rigoletto - Rigoleto; G. Puccinija La Boheme - Marcello, Maddamma Butterfly - Sharpless, Tosca - Angelotti; then the role of Miller Sime by Gotovac,  Mascagni: Cavalleria rusticana - Alfio, Escamillo in Bizet's Carmen, Stanko in Hatze's Return, Count Almaviva in Mozart Figaro's merriage, Malatesta in Don Pasquale, Belcore and Dulcamara in Love Potion by Donizetti; Evgenij Onjegin from the eponymous opera of Tchaikovsky, Jules from Suzannes Secret by Wolf-Ferraria. He also sang the mentioned titles in all Croatian opera houses and summer festivals, and he also performed at the Sarajevo Opera in the productions of Barbiere di Siviglia (Rossini) and Merry widow (Lehár). At the same time, he also deals with concert activity. From 2005 to 2009 he was an intendant (general menager) of the Croatian National Theater in Osijek. Since 2007, she is an external associate, and since 2015 she is a full-time associate professor at the Osijek Art Academy.

Berislav Jerković (1977), associate professor at the Osijek Art Academy. He is also the founder of the Opera ensemble of Academy of Arts in Osijek. He graduated at the Music Academy in Zagreb and Music Pedagogy at the Pedagogical Faculty in Osijek. Postgraduate Art Studies at the Music Academy graduated at the Music Academy in Zagreb, postgraduate education at the Kunstuniverität in Graz and a doctoral study at the Faculty of Philosophy in Zagreb. In 1997 he debuted in the opera and since then has performed a number of solo roles in operas, operas and musicals: Rigoletto, Courageous Dance, Evgenij Onjegin, Carmen, Gianni Schicci, Sonnambula, Figaros merriage, Love Potion, Tosca, La serva padrona, Nikola Šubić Zrinski, Cosi fan tutte, Ero the joker, I Pagliacci, La boheme, Suzanas secret, Magic flute, Camelot, Dido and Aeneas, Man from Manche etc. He co-operated with domestic and international famous performers: G. Holerung, G. Bizanti , P. Erdei, V. Sutej, Z. Hamar, S. Britvic, I. Repusic and others . He performed at international music festivals: Split Summer, Varaždin Baroque Evenings, Festival in Donat, Varazdin Summer Festival, Osijek Summer Culture, Sarajevo winter festival, Concerts in Euphrasius, Hvar Summer festival, Zagreb Baroque Festival, as well as many other festivals at home and abroad. He has performed numerous solo concerts throughout Croatia, Slovenia, Serbia, Hungary, Germany, Austria, Italy, Spain, Spain, Venezuela, USA, Belgium, China. He collaborated with the Croatian Baroque Ensemble in performing the work of the old masters. He is intensely involved in research in art and science and has exhibited at professional conferences and conferences in Bologna, Paris, Marlborough, Beijing, Rochester, Thessaloniki, Brisbane and Princeton. He leads master workshops and expert seminars for singers, choirs and conductors of vocal ensembles. In addition to a successful singer, he also conducts conducting activities, and concerts with choirs and ensembles both at home and abroad, and is also the recipient of numerous awards - as a soloist and conductor.

Born 29.12.1996. year in Požega. He finished the Music School in Požega - solo singing, in the classes of Ana Ticl and Anastasia Vranic. Currently he is at the 2nd year of Studying at the Osijek Art Academy, where he attends the main subject of the profession - Singing at doc.art. Vlahe Ljutića and associate professor. Berislav Jerković. In addition to performances all over Croatia and abroad she regularly attends seminars of vocal pedagogues. He has also performed at numerous singing competitions. In 2015, he won 2nd place in the national competition of HDGPP. For the last four years he has performed at the International Competition "Lav Mirski" in Osijek. 2014 won the 2nd prize in 2015, the 1st prize in 2016 won the 1st prize and was the overall winner of the 1st category as well as in 2017, when he was the overall winner in the 2nd. category. In 2017 he performed with the Opera Ensemble of the Art Academy in Mozart's opera Figaros merriage in the roles of Bartolo and Antonio. He is currently preparing role of Betto in Puccini's comic opera Gianni Schicchi. In 2017 he performed solo roles in the cantata of Septem Ultima Verb a by contemporary American composer Michael J. Trotta.

Ante Blazevic was born in 1983 in Virovitica. He finished basic music education at the Music School in Slatina in just three years. The Osijek secondary music school also finished in three years. The piano piano studies ended with a great success in 2006 at the Zagreb Academy of Music, in the class of prof. Damir Sekosan. During his schooling he performed in Slatina, Osijek, Našice, Požega, Virovitica, Daruvar, Zagreb and the Republic of Hungary. His most significant performances include performances at two Piano Memorials "Darko Lukic" in 2003 and 2005, performances at the Croatian Music Institute 2004 and 2006, performance at the International Music Festival "Milko Kelemen Days" in Slatina 2005 and 2015. and solo recitals in Pozega; Osijek and Nasice. His highly acclaimed piano recitals are also highlighted in the concert cycle "Osjecka Glazbena Srijeda" in 2013 and 2015. For a number of years he has also performed in a duet with the professor of bajan - Nikola Jankov, performing his own transcription of popular classical compositions. He graduated from seminars of prominent world pedagogues and pianists; Leonid Sincev (Russia), On Mitania (Japan), Laszlo Baranya (Hungary), Eugen Indjic (France), Ruben Dalibaltyan (Armenia). He attended the International Piano Competition "EPTA" in 2011. Pedagogical work began to deal in Slatina in 2004. He has been employed as a corepetitor - artistic accompanist of solo singers at the Osijek Academy of Art since 2008. He also worked as a corepetitor of the string section at the Music School "Franjo Kuhac" in Osijek from 2011 - 2014. His most important performances as a piano accompanist are his piano collaborations on several complete opera projects (G.Puccini - Gianni Schicchi, W.A.Mozart - Cosi fan tutte, G.Donizetti –Love potion) at the music festivals in Osijek, Valpovo, Grožnjan, Buje, Sarajevo, Belgrade, Novi sad and Hvar 2013. -2016.