Bach's Flute Sonata in E minor is a product of his years in Cologne, when the composer was in the service of Prince Leopold as an orchestra leader and chamber musician. The Sonata in E major was inspired by Bach's visit to the court of Frederick the Great in 1741, where his son Carl Philipp Emanuel had been appointed principal harpsichordist the year before. Bach dedicated the work to Michael Gabriel Fredersdorf, the King's private secretary, who, like the King, was an amateur flutist. The four-movement composition is followed by a work in only three movements. The middle movement of the A major Sonata is in the unusual parallel key of A minor. This movement survives incomplete in the autograph of the work, which has since been reconstructed by several composers, so that it is known only in these forms. The two pieces that follow the intermission, the Sonatas in G minor and B minor, are also in three movements. While we know that the former may have been played on the violin, the latter may have been originally written for a different instrument, based on the surviving manuscripts. It is worth noting the change of function of the piano - or originally harpsichord - part in these works. In the first two, it is only present as a basso continuo, providing accompaniment, and its main function is to provide harmonic support for the bass solo. In the other sonatas, on the other hand, it is now an obbligato instrument, i.e. it participates in the musical process as an instrument in its own right. Its solo parts complement the flute, imitating its melodies, and often almost doubling it.

He has been playing the flute since the age of eight, a member of the Kaposvár Symphony Orchestra since 1966, and first flute of the Csiky Gergely Theatre in Kaposvár since 1967. In 1971 he won first prize at the Concertino Praha 71 international music competition, in '72 the Hungarian Television Flute Competition's Grand Prize, and in '73 the UNESCO Grand Prize in Bratislava. Between 1973 and 1978 he continued his studies at the Liszt Ferenc Academy of Music in Budapest. At that time he was elected first flutist of the Hungarian State Opera House. Between 1976 and 1993 he was principal flutist of the Hungarian Radio Symphony Orchestra. In 1976, he founded the Wind Quintet of the Radio Orchestra, with which he won the first prize at the Colmar Wind Quintet Competition in 1979. As a soloist, chamber musician and orchestra member, he has given numerous concerts in the world's most prestigious concert halls, such as the Barbican Center in London, Carnegie Hall in New York, Suntory Hall in Tokyo, the Moscow Conservatory, Hercules Hall in Munich, the Festspielhaus in Salzburg and the Filmarmonie in Berlin. In 1988, as a soloist with the New Zealand Symphony Orchestra, he appeared as a guest soloist in New Zealand, and gave recitals in Berlin and Paris. In 1990, he recorded all of Mozart's flute concertos with Hungaroton. In 1991 he enrols in Karl Österreicher's master class in Vienna, and at his encouragement he makes his debut with the Hungarian Radio Symphony Orchestra in the same year, and later conducts the State Concert Orchestra in Eisenstadt. Meanwhile, he becomes principal conductor of the Kaposvár Symphony Orchestra, and in 1993 he becomes principal flutist of the Hungarian State Orchestra and assistant conductor to Ken-Ichiro Kobajashi. With this orchestra he has toured as a conductor in England, Germany and Austria. He founds the Nicolaus Esterházy Sinfonia Orchestra and records all Beethoven and Haydn symphonies with the Naxos label. During his conducting career he also conducted the Radio Orchestra and the MÁV Symphony Orchestra.


Dániel VILLÁNYI, pianist, graduated with a BA degree from the Liszt Academy of Music in 2010, where his teachers were Kálmán Dráfi, András Kemenes, Rita Wágner and Márta Gulyás.

He continued his studies at the Hochschule für Musik Franz Liszt in Weimar with Balázs Szokolay and Larissa Kondrateva, and then at the Buchmann-Mehta School of Music in Tel Aviv with Emanuel Krasovsky. In 2013, she also obtained her MA degree in Weimar, where she was admitted to the Konzertexamen, the highest level of soloist training. To date, he has made numerous highly successful solo, orchestral and chamber music appearances at prominent classical music events and venues such as the ECHO "Rising Stars" international concert series at the Palace of Arts. She has performed in Germany as soloist with the Jena Philharmonic Orchestra and has had several highly successful concerts in Vienna, among other places. The highlight of her career came in 2018, when she performed Bach's Goldberg Variations at one of Europe's most important classical music festivals, the German Rheingau Musik Festival. As a chamber musician, he has played with such distinguished partners as Zoltán Fejérvári, Bálint Mohai and Lydia Rinecker. His first solo album will be released in 2022 under the auspices of Austrian Gramophone.

The concert is jointly organised by the Hungarian Kodály Society Pécs-Baranya Member Group, the Potenton Foundation, the PTE MK ZMI and the Arts Working Committee of the Pécs Academic Committee.

We are looking forward to welcome you! 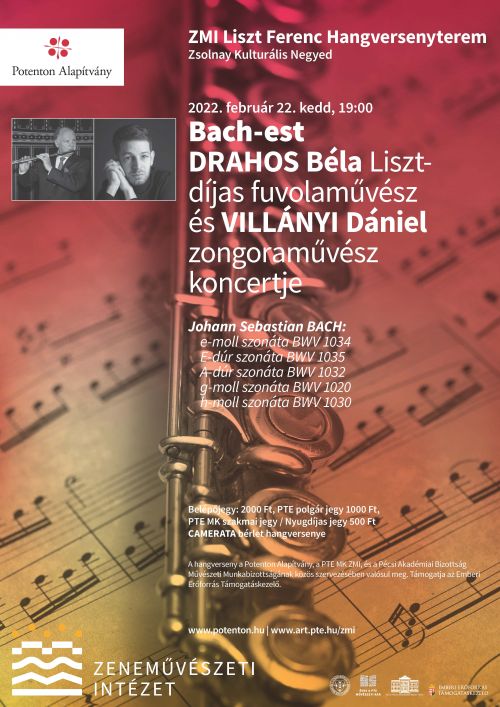