* Registration is reqired for the concerts, which can be done by email to the following address: koncert.zmi@gmail.com.*

"Kristóf Baráti is the most talented violinist of his and many generations. He is a true soloist!" (Ida Haendel) "
"A talent like him comes along once in a decade, perhaps once in a generation" (Fanfare)


Kristóf BARÁTI was born in Budapest, but a large part of his childhood was spent in Venezuela. He began his violin studies at the age of five and already from age of eight he made his first solo performances with the leading Venezuelan orchestras. At the age of eleven he was invited to Montpellier to give a recital at the prestigious “Festival de Radio France”.
His studies continued in Budapest with Miklós Szenthelyi and Vilmos Tátrai in the Franz Liszt Academy of Music. Still a student, he won first prize at the Lipizer Competition in Italy and second prize in the Long-Thibaud Competition in Paris. In 1997 he won third prize and the audience prize at the highly prestigious Queen Elisabeth Competition in Brussels, being the youngest finalist.
After this success he redefined his violin technique in Paris with Eduard Wulfson, whose knowledge was influenced by great violinists of the 20th century such as Nathan Milstein, Yehudi-

Menuhin and Henryk Szeryng. In 2010 Baráti won the “Oscar of violinists”, the highly praised Paganini Competition in Mowscow.

Kristóf Baráti has received several awards, including the Kossuth Prize, the most prestigious award of his native Hungary in the domain of culture. He gives regular master-classes at Pécs (Southern Hungary) and teaches at the University of Pécs. He is, together with the cellist István Várdai, artistic director of the Kaposfest International Chamber Music Festival in Hungary.

Kristóf Baráti plays the 1703 “Lady Harmsworth” made by Antonio Stradivarius, kindly offered by the Stradivarius Society of Chicago.

A regular ensemble partner with such musicians as Nadja Michael and Kristof Barati, the Russian pianist Zarina SHIMANSKAYA has performed across Russia, Europe and Asia in solo, orchestra and chamber music concerts. Amongst others, her appearances include engagements in Wigmore Hall, Mozarteum, Laeiszhalle Hamburg, Mariinsky Concert Hall, Grand Hall of Moscow Conservatory, Radial System Berlin, Juedisches Kulturzentrum in Munich, Klavier Festival at Brucknerhaus in Linz, Diaghilev Festival in Perm and Stars of the White Nights festival in Saint Petersburg. Miss Shimanskaya has collaborated with orchestras under the batons of Ravil Martynov, Pavel Gribanov, Vasiliy Valitov and Teodor Currentzis.

Her repertoire reflects her many interests in exploring and interpreting the world’s music literature and ranges from Tchaikovsky’s First Piano Concerto and Mozart’s d-minor Concerto to works by Frank Martin, Krzysztof Penderecki, Alfred

Schnittke and Rodion Shchedrin. Educated both in Russian and European pianistic traditions, she continues to perfect her craft in master-classes with such artists as Arie Vardi, Alexei Lubimov, Leonid Brumberg, Stephen Kovacevich, Alexander Toradze and Leonidas Kavakos.

Ludwig van BEETHOVEN: Sonata for violin and piano in G major, No.3, op.30. 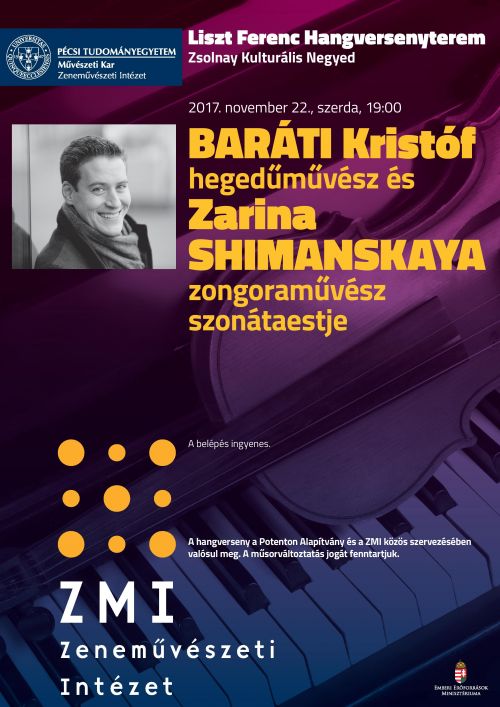