Carlo MARCHIONE is the winner of seven international competitions and has been a leading figure in classical guitar for thirty years. As a soloist he has performed with numerous orchestras and chamber music ensembles. Today, as a teacher, he regularly gives master classes at various music universities in Europe and is a regular guest at European festivals. He has been awarded one of the most prestigious international prizes, the 'Golden Guitar', for his outstanding contribution to the development of the guitar. 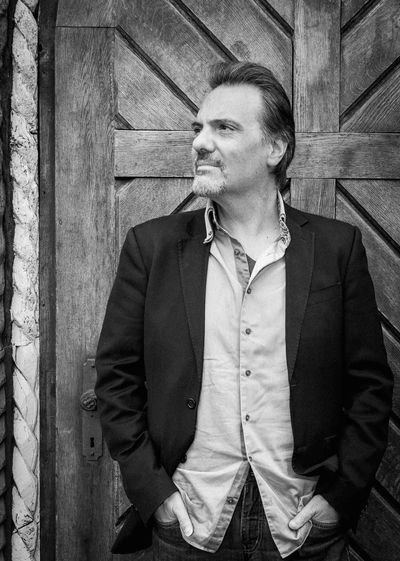 He started taking guitar lessons at the age of ten, first from Master L. Cauzzo and then from L. Gallucci. In 1976 he was accepted to the Santa Cecilia Conservatory in his hometown, where he was the first of 100 applicants to be admitted. There he studied with Master Mario Gangi and graduated with honours in 1983. During his career, he has won several prizes at international competitions (Ancona 1979/80, "L. Legnani" Parma 1981, "M. Giuliani" 1982, "Ville de Sablé" 1985, Gargnano 1989, "N. Paganini" 1991, "Città di Latina" 1992). Composers such as A. Carlevaro, C. Domeniconi, S.Iannarelli, K.Vassiliev, A. Ourkouzounov, G.Drozd and John Duarte have written for him. Always looking for new inspiration, he has added to his repertoire a number of almost forgotten works, which in his brilliant transcriptions have become real jewels. His 12 Violin Fantasias by Georg Philip Telemann, edited by the composer, have been praised by the press and published on CD and as an orchestral book. He is a renowned and distinguished university professor specialising in the analysis of guitar music. He teaches at the Maastricht Conservatoire (Netherlands), Pôle Superiour d'enseignements artistiques (apPSEA) in Lille, (France), "Civica Scuola delle Arti" Rome (Italy), Conservatori Superior de Música de les Illes Balears in Mallorca (Spain), Scuola di Specializzazione post laurea in Beni Musicali in Turin. (Italy).

Besides, he is a big fan of online education, so he and his fiancée founded the Marchione Online Academy, which allows him to teach anywhere in the world. He publishes regularly, with his own publishing company MarchioneMusic Editions, he releases a new guitar transcription every month.

Ferdinand Rebay was an Austrian composer, music teacher, choral conductor and pianist of Bartók's time. He was introduced to the guitar through his colleague Jakob Ortner, and his dedication to it was only increased by the fact that his niece Gerta Hammersmid, Ortner's guitar pupil, was committed to performing Rebay's works. He wrote nearly 400 works for the instrument, his anachronistic style rooted in 19th century Austro-German musical values. He created the romantic post-Beethoven sonata for this instrument. The clear melodies and translucent accompaniments of Schubert and Schumann's songs are truly rewarding material for various transcriptions. And the guitar is ideally suited to lead the melody vocally and add subtle accompaniment.
Sainz de la Maza is a Spanish guitarist and composer who was a professor of guitar at the Madrid Conservatory until his retirement. His works, composed exclusively for guitar, draw heavily on the sounds of Castilian and Andalusian folk music. Some of his works have become fundamental works of the guitar repertoire.
Mauro Giuliani is an Italian guitar virtuoso and one of the most important composers of the 18th and 19th century guitar literature. As there were many talented guitarists throughout Italy in the early 19th century, but Italians showed little interest in music outside of opera, Giuliani moved north and eventually settled in Vienna, where he spearheaded the classical guitar movement, taught a rich repertoire and composed extensively. Fernando Sor is Giuliani's Catalan contemporary. He made his name primarily as a guitarist, and his 65 compositions for this instrument form an important part of the classical guitar repertoire. He also composed numerous vocal works, which had a noticeable influence on the song-like melodic treatment of his guitar works.

The concert is jointly organized by the Potenton Foundation, the PTE MK ZMI, and the Pécs Academic Committee's Arts Working Committee. It is supported by the National Cultural Fund and the Human Resources Fund. 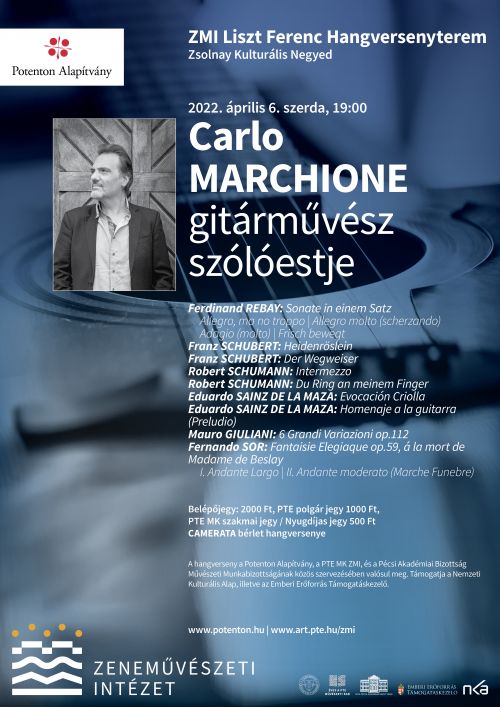